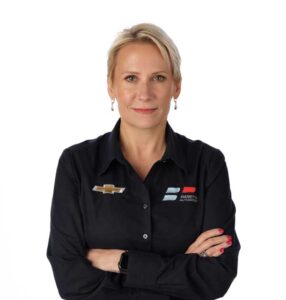 Beth Paretta is co-founder with Lyn St. James of Women in Motorsports North America.  She was a panelist during WIMNA’s Women with Drive II Summit in Concord, North Carolina on October 5 & 6, 2022.  Paretta is a longtime standout in the motorsports industry – breaking barriers behind the scenes, in corporate boardrooms and high atop the pit box. Her ground-breaking work and the ensuing legacy she’s created have been significant in advancing the roles of women in motorsport for decades.

Paretta was the first female director of a performance brand and motorsport for an automotive company (at Fiat Chrysler Automobiles) and worked as operation manager for Aston Martin the Americas. Later, as director of marketing and operations for Fiat Chrysler Automobiles the brand’s SRT division – Street Racing and Technology and motorsport – the company earned national titles with its Viper brand in IMSA and Dodge brand in both NASCAR’s Xfinity and premier NASCAR Cup Series.

In 2015, Paretta launched Grace Autosport – a women’s race team – with the idea of inspiring and helping girls in STEM education.  In 2021, Paretta Autosport debuted, focusing on initiatives for women to further diversify the auto racing industry.

In May, 2021, her Paretta Autosport team – part of the “Race for Equality & Change” initiative – qualified for the Indianapolis 500 with Swiss driver Simona De Silvestro. More than 70 percent of the Paretta Autosport team fielding the car – both on the competition and business side – was made up of women. And in 2022 the team earned sponsorship to compete in at least three NTT INDYCAR SERIES races with De Silvestro, who is coming off a season-best showing of 18th at the Mid-Ohio Sports Car Course this summer.

How did your motorsports journey begin?

I absolutely was a fan and started watching racing. My earliest memories of watching racing are on TV as a 3-year old, 4-year old, 5-year old. Being mesmerized by watching it on television and from then wanting to know every car, every driver, the numbers, the colors that sort of thing a kid gets fixated on. So, I can trace it back to that. And as I got older, my home track is Lime Rock (Conn.), so when I was young, I would beg my parents to take me on race weekends. It kind of went from there.

It wasn’t until years later, decades later, I was following Formula One, and when I was old enough, I’d go to F1 races. I remember my first F1 race was Montreal because being from the Northeast you could just drive up there. I would watch F1 on TV and invite my mother to watch it with me. It was my hobby, so I wanted to see if I could get her to enjoy it too. And will always remember this, she casually mentioned that when she was dating my dad, they’d go to the local oval track the next town over and she did timing and scoring. And she never had mentioned this to me until I’m in mid-20s. So, the ultimate irony is that it was sort of in my blood, but I had no idea, and nobody cared to mention that.

Literally no racing in my family whatsoever, I’m a fan who was relentless.

What was the process to become a team owner and ultimately establishing an emphasis on hiring and promoting women in this field?

All the car companies and suppliers were lamenting a shortage of talent and a future shortage of talent and looking around the room I saw there were very few women. And I’m acutely seeing that because I’m seeing it through my lens. I’m sitting in rooms with men all the time and I’m now the OEM representative. If I’m in a NASCAR meeting it’s the Ford guy, the GM guy, the Toyota guy and me, representing Dodge.

I’m walking through the paddock and meeting different people, there are women here but not very visible. They are the behind-the-scenes women. I understand the effort to get more women as drivers. That is very visible. But there are all these other jobs. Where are they…?

My business mind was that one of the solutions is broadening the pool to include gender because you’re leaving half of the candidates out. Because it was just 2014, it was a novel idea. Now everyone’s talking about it. I hope I was one of the people that helped to push that idea forward.

Outside of motorports what would you say is your greatest talent?

I’m a decent skier for sure. I lived in Vermont and prior to working in automotive I worked in the alpine ski business so I’m a pretty good skier. It feels like a whole other life I had (laughing…).

I will say this and most drivers who also ski will tell you this, all my years of skiing, it’s so similar, the way you are setting up turns, where your eyes go, hands. It’s way more similar [to racing] than people realize.

If you had to pick one person that has influenced your time in motorsports, who would that be and why?

I get that question a lot, who’s your role model?

I’d say, Roger Penske. He’s somebody that has given me the nod and put his arm around me. And certainly, his endorsement has been worth its weight in gold and that’s given me a lot.

I’d say, the person behind the scenes that has helped me the most, Paul Pfanner [of RACER Magazine].

The reason I say Paul is because I had this idea [to field an all-women’s team in the Indy 500] and there were a lot of challenges along the way where I kept getting knocked-down, knocked-down, knocked-down. Paul knew in real-time all those knockdowns and was always the guy in my ear on the phone saying, ‘keep going, you’ve got this.’ It wasn’t someone close to the finish line saying this. And this was an idea going back to 2014.

Do you have a favorite saying or piece of advice?

Work hard, work together and build the things you want to see in this world.

My thing is work hard, work together. I think for women in all professional roles, because there was historically only one seat at the boardroom – if there was a seat – women were competing against other women for that one seat. So, I think women haven’t always been kind or helpful to each other, it was always elbows out to the other women more than elbows out in general. And I’m not saying we should be elbows out. Sometimes you have to be competitive, but the old-boys network existed, and women were not doing favors for each other and therefore not doing any favors for themselves. Part of it was societal and bread into us. As you’re climbing up the ladder you ‘re stepping on the fingers of the women before you.

So where are the other women? Well, you didn’t do anything to help the other women. And I think we are getting better about that now. Case in point, WIMNA.

I think women now and hopefully the generation after us, feel better about helping each other because ideally it will pay dividends.  We’re not trying to take your seat at the table, we’re trying to build a longer table.